Virus Did Not Bring Financial Rout That Many States Feared

Throughout the debate over stimulus, one question has produced repeated deadlock in Washington: Should the states get no-strings federal aid?

Republicans have mostly said no, casting it as a bailout for spendthrift blue states. Democrats have argued the opposite, saying that states face dire fiscal consequences without aid, and included $350 billion in relief for state and local governments in President Biden’s $1.9 trillion federal stimulus bill, which narrowly passed the House this past weekend. It faces a much tougher fight in the Senate.

As it turns out, new data shows that a year after the pandemic wrought economic devastation around the country, forcing states to revise their revenue forecasts and prepare for the worst, for many the worst didn’t come. One big reason: $600-a-week federal supplements that allowed people to keep spending — and states to keep collecting sales tax revenue — even when they were jobless, along with the usual state unemployment benefits.

By some measures, the states ended up collecting nearly as much revenue in 2020 as they did in 2019. A J.P. Morgan survey called 2020 “virtually flat” with 2019, based on the 47 states that report their tax revenues every month, or all except Alaska, Oregon and Wyoming.

A researcher at the Urban-Brookings Tax Policy Center, a nonpartisan think tank, found that total state revenues from April through December were down just 1.8 percent from the same period in 2019. Moody’s Analytics used a different method and found that 31 states now had enough cash to fully absorb the economic stress of the pandemic recession on their own.

“You can see it’s just a completely different story this time,” said Louise Sheiner, a Brookings Institution economist whose research showed that over all, the states struggled far less during the pandemic than in previous recessions. 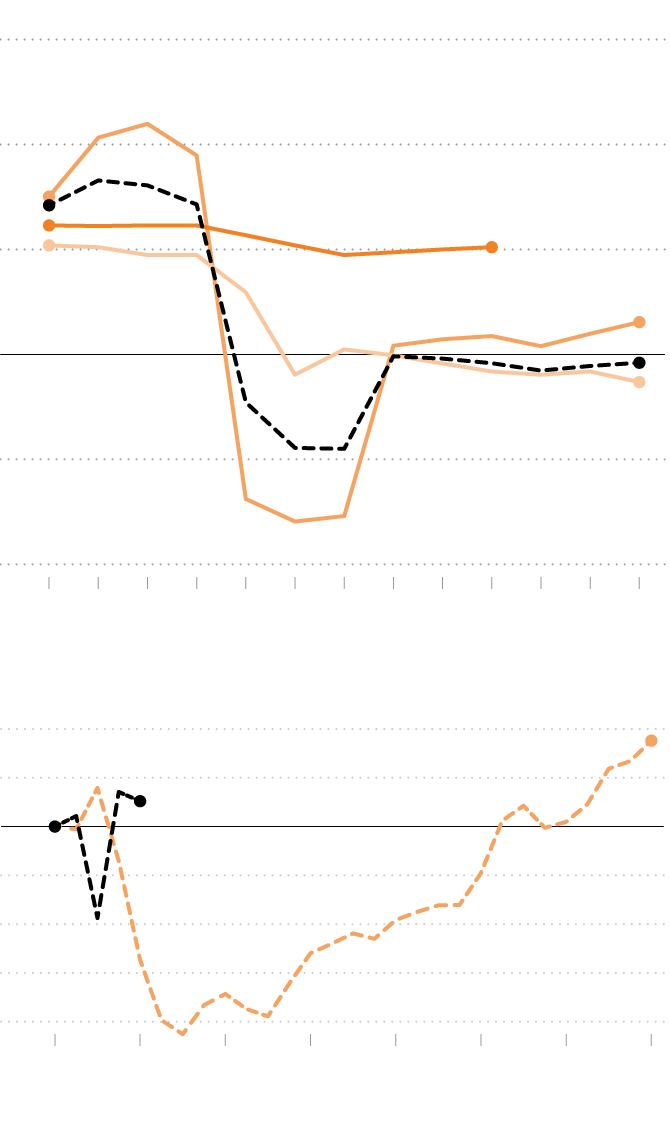 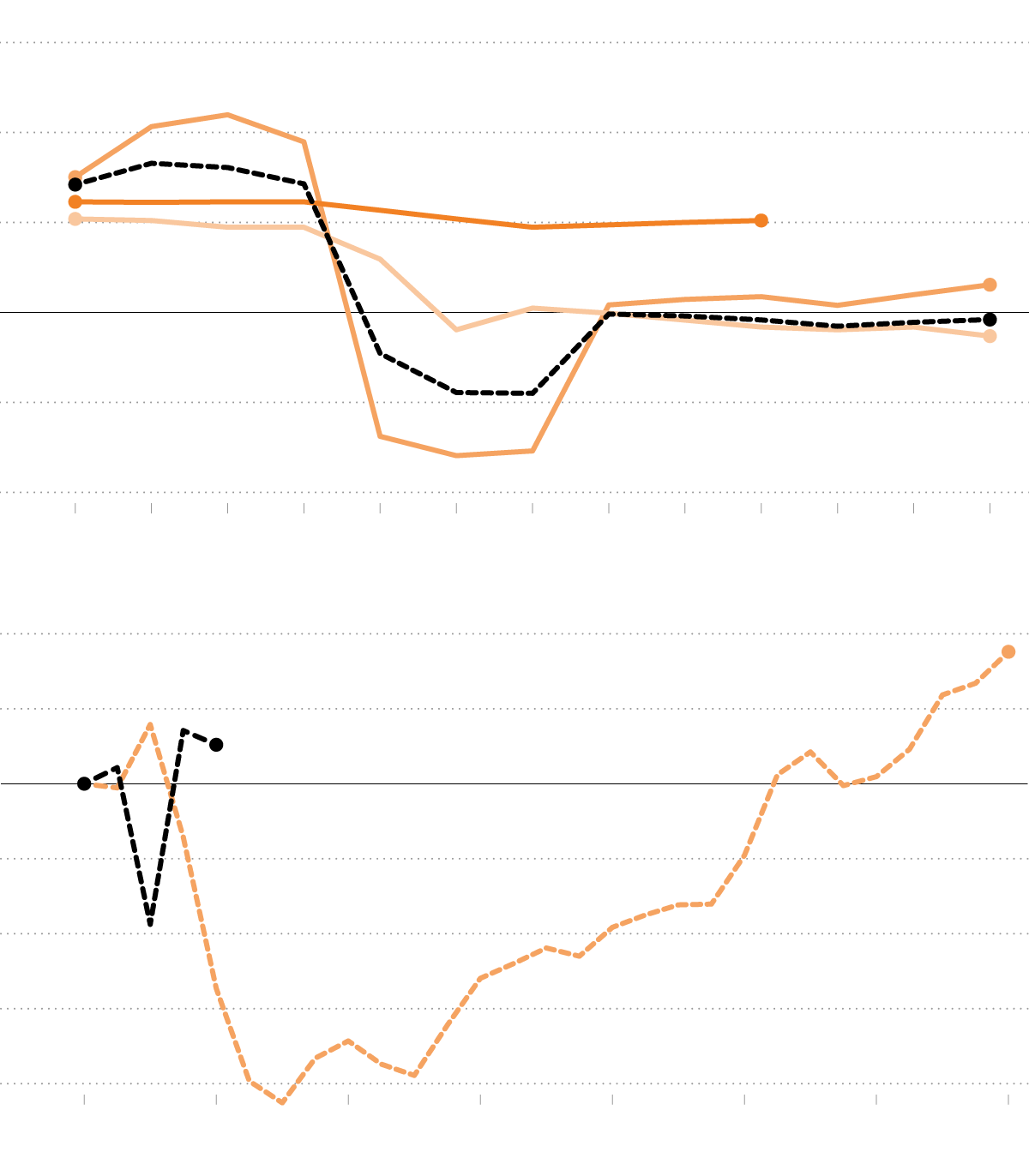 New Jersey, for instance, managed to avoid financial calamity despite a dire forecast when the pandemic started, because of better-than-expected tax revenue from retail sales and high earners, who lost fewer jobs and reaped the benefits of a bullish stock market. However, it still had to borrow $4 billion in emergency relief.

The findings are being cited by Republican lawmakers. In a Feb. 2 blog post, the House minority leader, Kevin McCarthy, Republican of California, said the J.P. Morgan report was evidence that the states were doing just fine. He called on Democrats not to insist on “blue-state slush funds that are not needed.”

At the same time, Democrats have said states need relief even if their revenues are resilient, because their costs will spiral as schools reopen and vaccination programs roll out.

Most state tax collections plunged last spring when shutdown orders started and millions were thrown out of work as businesses closed. That prompted many states to issue doomsday forecasts, lay off workers and turn to Washington for billions of dollars in aid to replace revenue they were expecting to lose. Many feared a replay of the Great Recession, when state revenues fell 8 percent and took more than five years to recover, exacerbating the overall downturn.

But this time, after falling 4 percent over all, Ms. Sheiner said, tax collections turned back up again, all in the span of a few months. She and other public finance experts cautioned that the numbers didn’t tell the full story. With new variants of the virus emerging, the pandemic isn’t over yet, and revenues could slip again — just as states increase spending amid signs of an economic rebound.

Also, averaging the states’ revenues — the J.P. Morgan report used weighted averages to show that revenues last year were down just 0.06 percent from 2019 — can mask the pain of the states whose tax collections have not yet rebounded. And focusing just on state revenue collection glosses over the weakness of local governments, which administer many social services under state administration.

“We know that local governments are doing far worse than the states,” said Lucy Dadayan, a senior research associate at the Tax Policy Center.

No matter how they measured the states’ rebound, the analysts said the federal stimulus money that began to flow to consumers and small businesses late in March — especially the extraordinary support for the jobless through the end of July — had helped greatly. Those programs allowed consumer spending to continue, even as unemployment surged to levels not seen since the 1930s.

During the Great Recession, Congress sent supplements of just $25 a week. This time, Washington sent supplements of $600 a week. Since the pandemic ravaged low-wage sectors like retail sales and restaurants, adding $600 a week to the lowest unemployment benefits pushed many recipients’ purchasing power above what they had while working.

In Illinois, for example, per capita personal income actually rose as the pandemic kicked in. It climbed to $66,224 in the second quarter, from $59,896 in the first, according to the state’s Office of Management and Budget.

Many states also benefited from tax-law changes enacted before the pandemic, after a 2018 Supreme Court decision that let them compel out-of-state retailers to collect sales taxes on online purchases. The new laws ended years of legal wrangling over how to tax such sales, just in time to help the states weather the pandemic-induced shift to online shopping.

“If the Covid-19 pandemic had occurred even five years earlier than it did, the impacts to state and local sales taxes would have been truly devastating,” Dan White, director of government consulting and public finance research at Moody’s, said.

Windfalls for Some States

In his survey, Peter DeGroot, head of municipal research and strategy at J.P. Morgan, found a handful of states, including Idaho, South Dakota and New Mexico, that managed to take in even more money last year than in 2019. The survey also identified several states where tax revenues have not yet bounced back because they depend heavily on tourism, oil and gas, or coal extraction — among them Hawaii, Nevada, Florida, Texas and West Virginia.

Ms. Sheiner’s analysis showed that Idaho had the biggest revenue recovery of any state. She conducted her research with Byron Lutz, an economist with the Federal Reserve.

The head of Idaho’s Division of Financial Management, Alex J. Adams, said in an interview that the rebound had taken officials by surprise, and that they thought one reason was an influx of new residents from California, seeking to escape that state’s high cost of living — a trend that started before the pandemic but accelerated last year. Mr. Adams also said Idaho didn’t pause construction when the lockdowns happened, which helped economic activity.

Idaho’s Republican governor, Brad Little, said in his State of the State address in January that 2020 revenue collections were strong enough to send $295 million back to the taxpayers, and still have enough to invest in better highways, bridges and broadband access. He also wrote to Idaho’s congressional delegation last year, urging it to oppose the use of no-strings federal dollars to bail out mismanaged states.

With some states now “enjoying windfalls” and others still struggling, Mr. White said a smaller amount of money, more carefully targeted to the states that needed it most, would be the most efficient approach for Congress. But getting assistance to those governments that truly need it, without sending unnecessary aid to those that do not, will require some “exceptional creativity,” he said.

To some extent, the states’ surprising recoveries reflect the timing of events last year. The pandemic started just as many state lawmakers were reviewing initial budget proposals for the coming fiscal year. The proposals, drawn up weeks before the shock, forecast a year of strong tax collections.

Then, in a matter of weeks, millions of people lost their jobs. State officials think of unemployment as a powerful driver of their fiscal affairs; research from past recessions suggests that a single percentage-point increase in the unemployment rate can produce $45 billion worth of state budget woe.

So they braced for disaster. Most states tore up their initial budgets, laid off workers and, like the federal government, pushed back their April income-tax deadlines to mid-July. Income tax receipts plummeted.

In April, the National Governors Association called on Congress to appropriate $500 billion “to meet the states’ budgetary shortfalls.” But the $500 billion of no-strings budget relief did not materialize. Most state lawmakers finished their budgets by the end of June and went home — and were not on hand to see the wave of income-tax revenue that arrived in mid-July.

By the end of July, revenue had recovered to 2019 levels and stayed there, said Ms. Sheiner, the policy director of the Hutchins Center on Fiscal and Monetary Policy at the Brookings Institution. Ms. Sheiner said she and her colleagues had been pointing out the signs of a recovery since September, but state officials remain guarded. They have not yet begun hiring back the 1.3 million public workers they laid off.

“If you talk to state and local government officers, they’re really cautious,” she said. “There’s so much uncertainty. They’re thinking, What if it goes back to how it was last spring?”